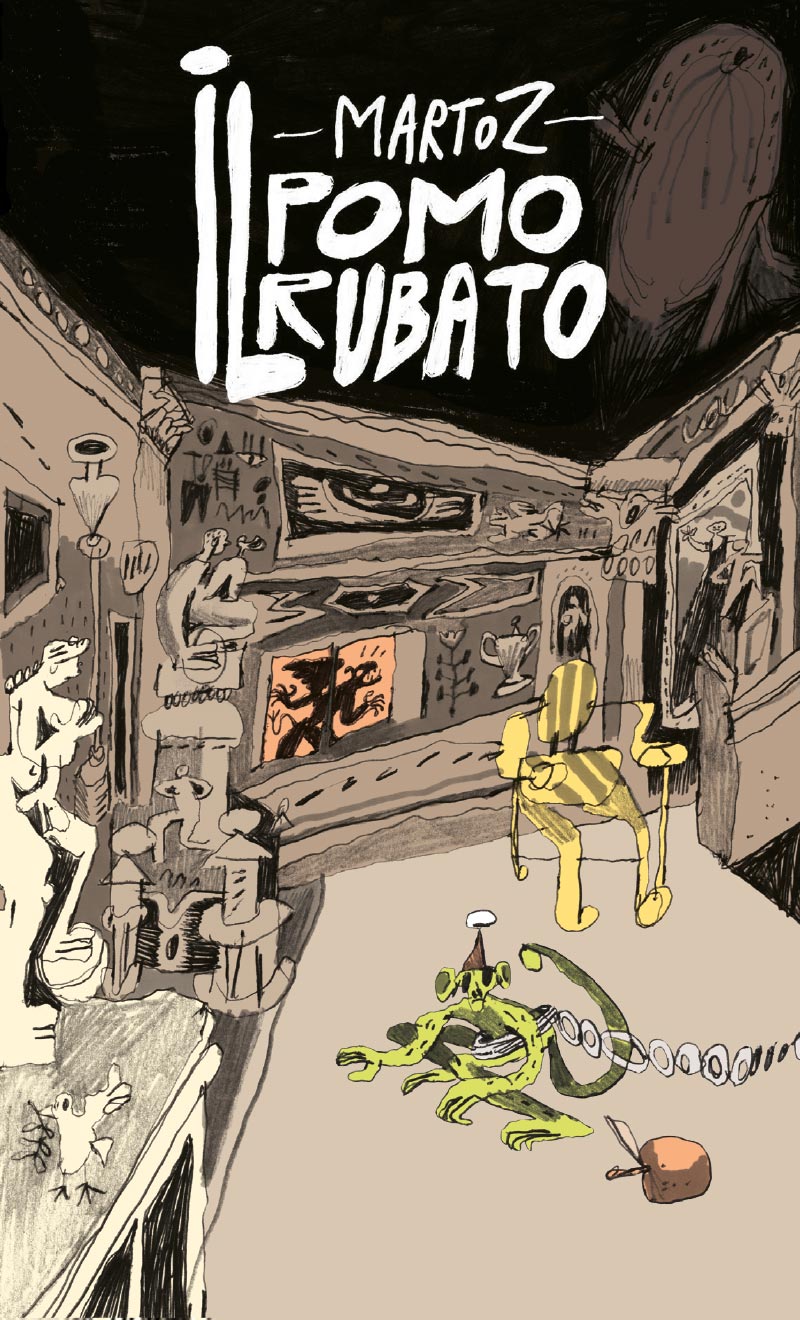 Il pomo rubato is a comics story that MARTOZ set at the Galleria Borghese.

A helter-skelter chase through the Galleria Borghese’s sculptures and frescoes… To stay out of reach, the lead character in Il pomo rubato must run as fast as she can, without being scared by the Cerberus’ triple growl, without being bewitched by the magical processions that file past her. Then, she finds a juicy apple to bite into, and a safe shelter on the shoulder of Napoleon Bonaparte, who is looking for his sister Paolina. But what about you? Will you too be falling in love at first sight? 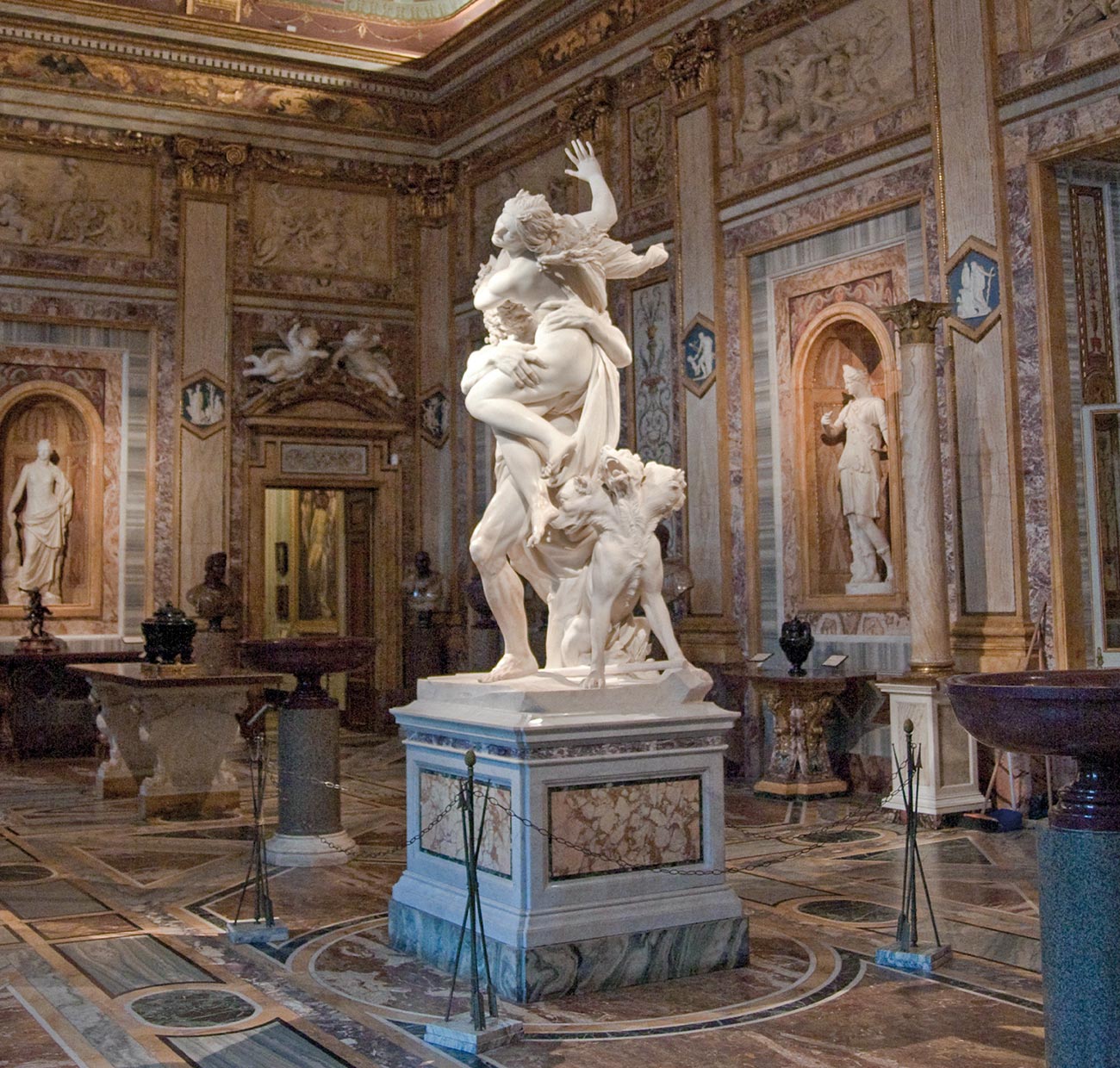 The Galleria Borghese collection, once hailed as the greatest in the world, is still housed in the place designed and created for that very purpose inside Villa Borghese, one of Rome’s finest parks. It was initially built up as from 1607 by Cardinal Scipione Caffarelli Borghese with paintings by Caravaggio, Titian and Raphael, later joined by the renowned sculptures of Bernini. The works are exhibited in twenty frescoed rooms richly decorated with marble, marquetry, mosaic, stuccowork and ancient inserts. Today, in addition to the permanent collection, the museum offers a rich programme of exhibitions embracing not only ancient and modern but also contemporary art. 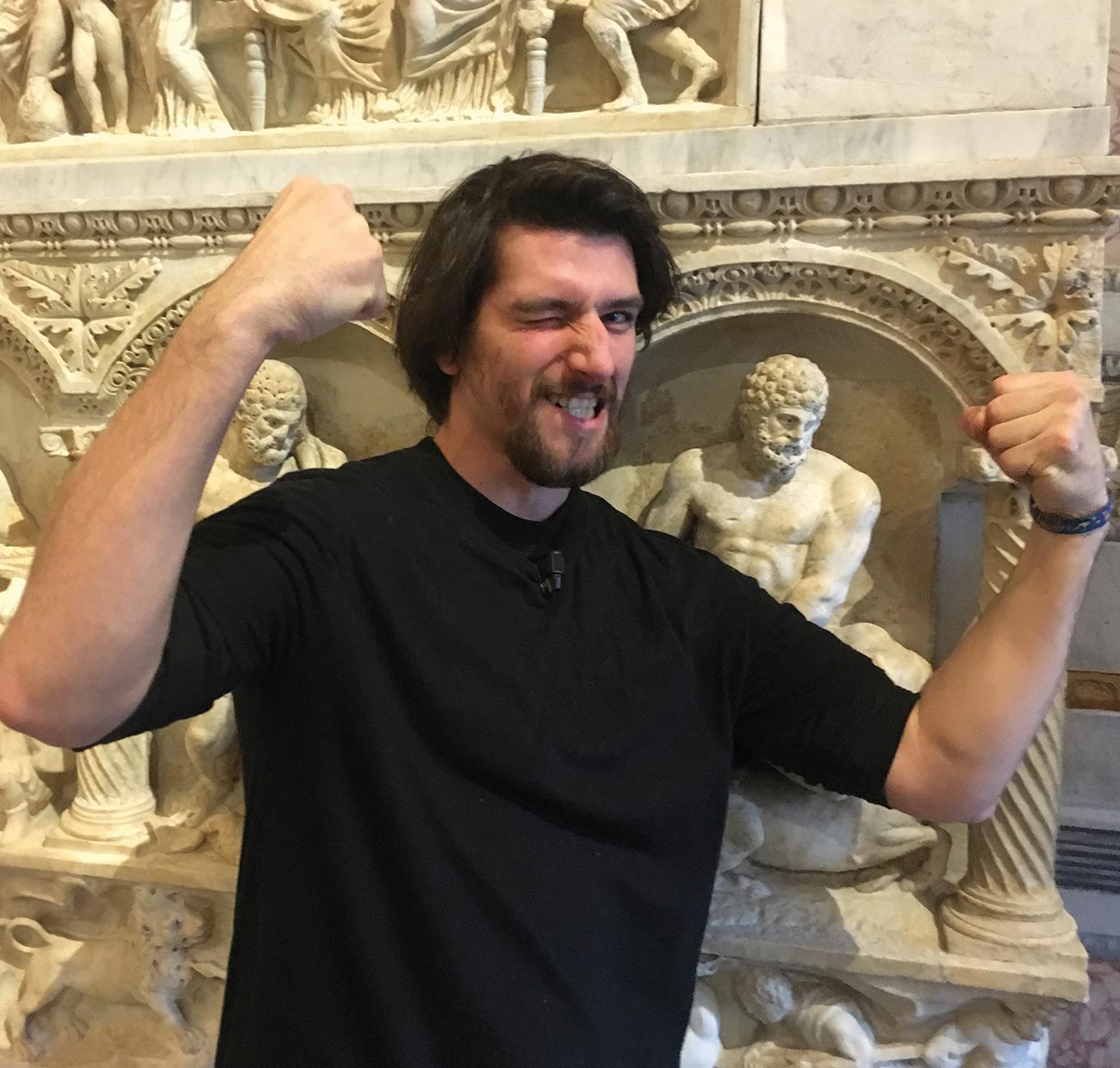 Challenging Hercules to an Arm Wrestle, The Comics Artist Loses
The Galleria Borghese is a treasure map chock full of Xs. It’s all treasure. “Too easy!”, I hear you say. But it isn’t! The first time I walked in, I got an instant headache. There were so many things to look at, I saw nothing. I was literally stunned... But fear not, all it takes is a deep breath and you start taking in individual things: that painting over there, the fresco up above, those zillion busts… I slowly started to enjoy such tremendous super-concentrated beauty. Trust me, every corner of the place is a hidden gem. So deeply did I dwell on the details that I ended up gaining a better appreciation of the “minor” works nobody usually even notices... Like the poor chained-up monkey! And then, well... then I fell in love.
MARTOZ is Alessandro Martorelli’s pen name.
MARTOZ was born in Assisi in 1990. He is a comic book artist, illustrator and street artist. He is active in the self-publishing world through a number of collaborative initiatives. He won the Boscarato Prize as “Best Emerging Author” at TCBF with Remi Tot in STUNT, a book published by MalEdizioni in 2015. Canicola published two books of his in 2016: Amore di lontano and La mela mascherata. In 2017, Coconino Press - Fandango and in 2019 Actes Sud of France published his book Il cacciatore Gracco. He drew Instantly Elsewhere for Lorenzo Palloni's story, which was published by Shockdom. He works with Illustratore Italiano, Vita, Linus, Il Sole 24 Ore and Associazione “Illustri”. He also makes murals for films and festivals, and has exhibited his work in Italy and elsewhere. 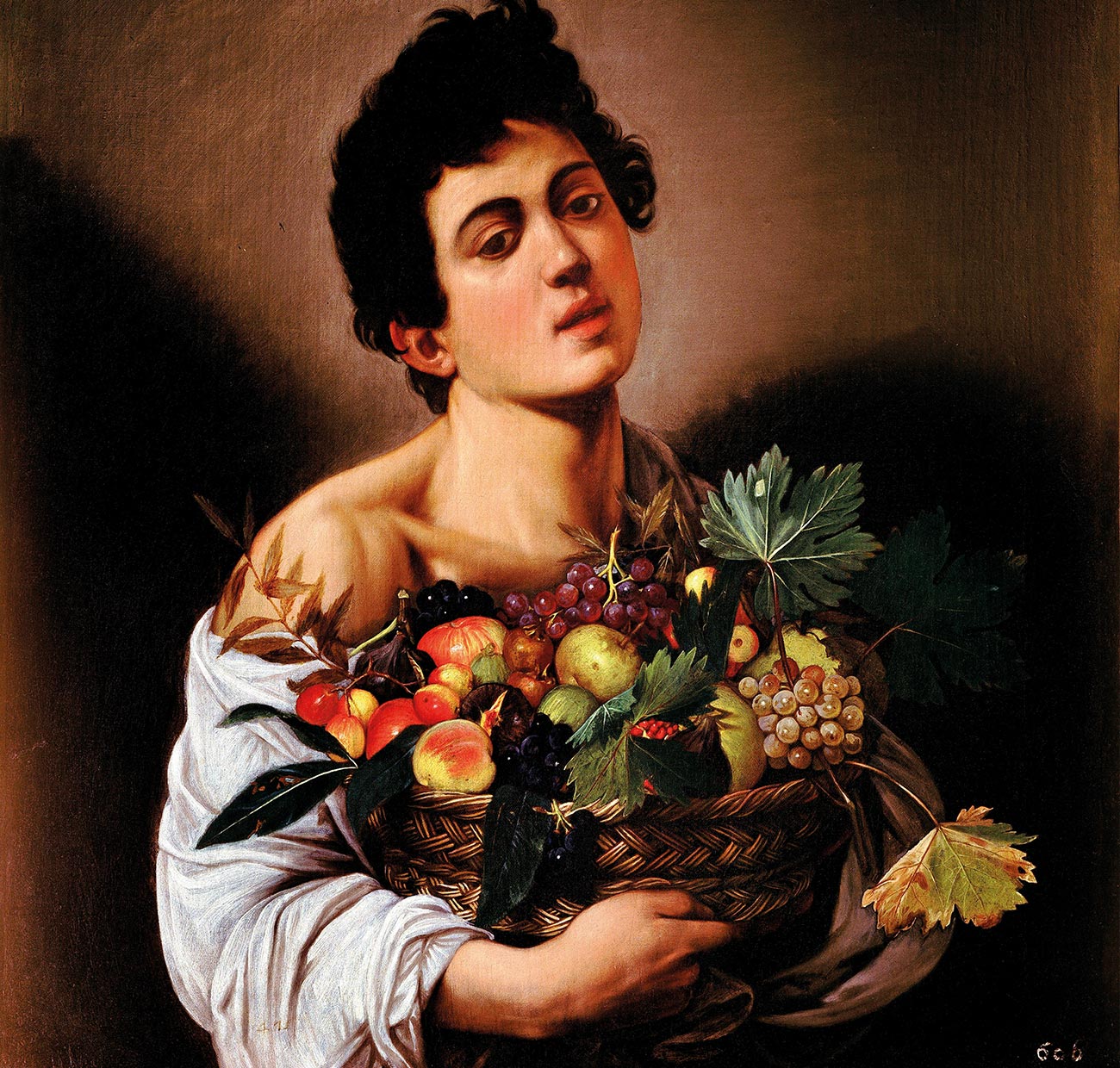 Boy with a Basket of Fruit
Michelangelo Merisi, known as Caravaggio. The basket held by a slightly vain youth is filled with apples, grapes still wet with dew and leaves of different kinds forming a still life, the term used when objects are removed from the living world of nature to take on the timelessness of art. Artists of the 16th and 17th century in Italy, and above all Caravaggio, the greatest genius at illuminating faces with the interplay of light and shadow, delighted in this kind of painting 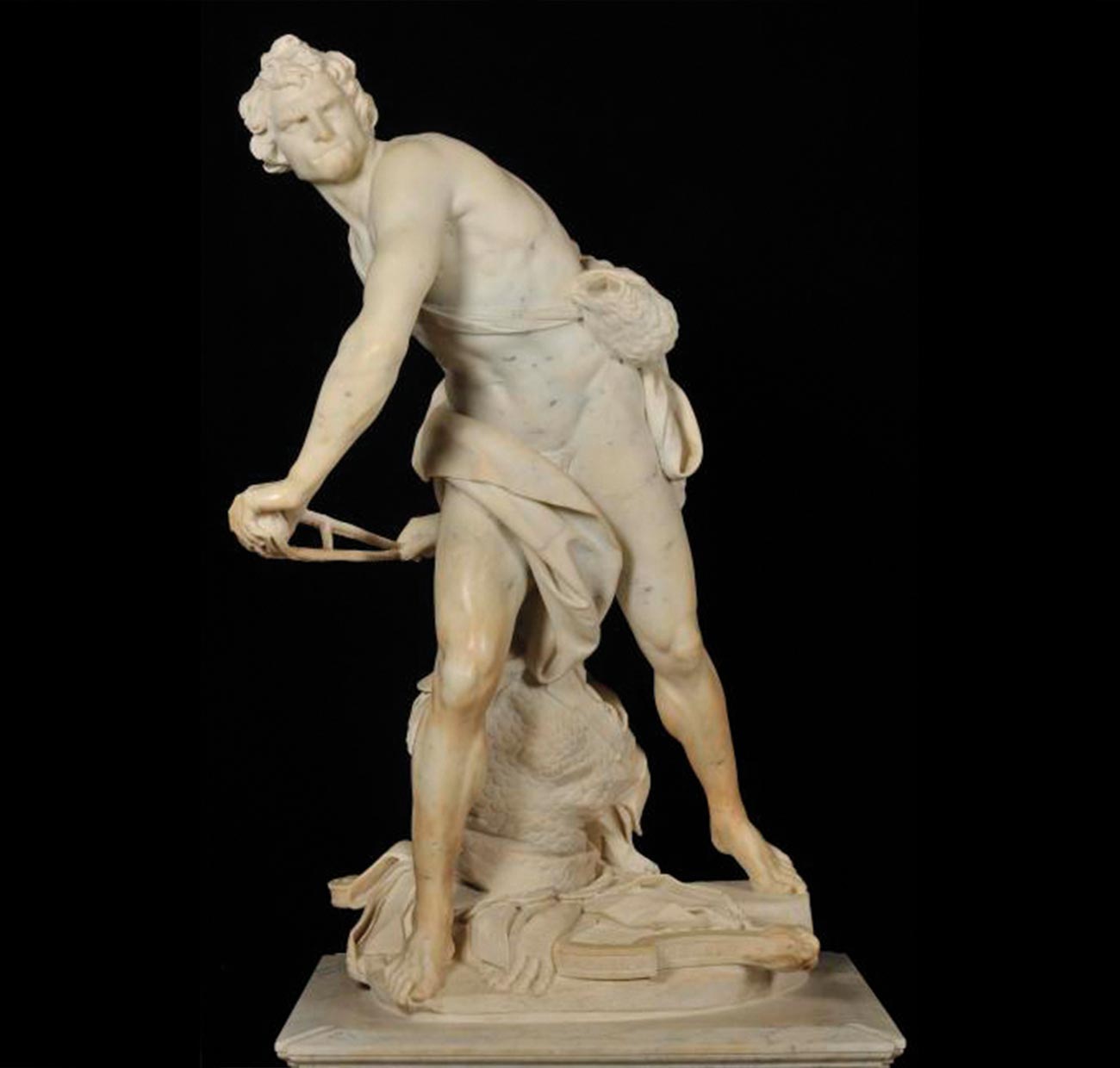 David
Gian Lorenzo Bernini. Frowning with concentration, his eyes fixed on the target, the hero David twists his tautly muscled body to hurl the stone from his sling at the giant Goliath. Gian Lorenzo Bernini, the genius of the Baroque era, chose to capture the most dramatic moment of the episode in Carrara marble in such a way that whoever views the sculpture frontally becomes the target. 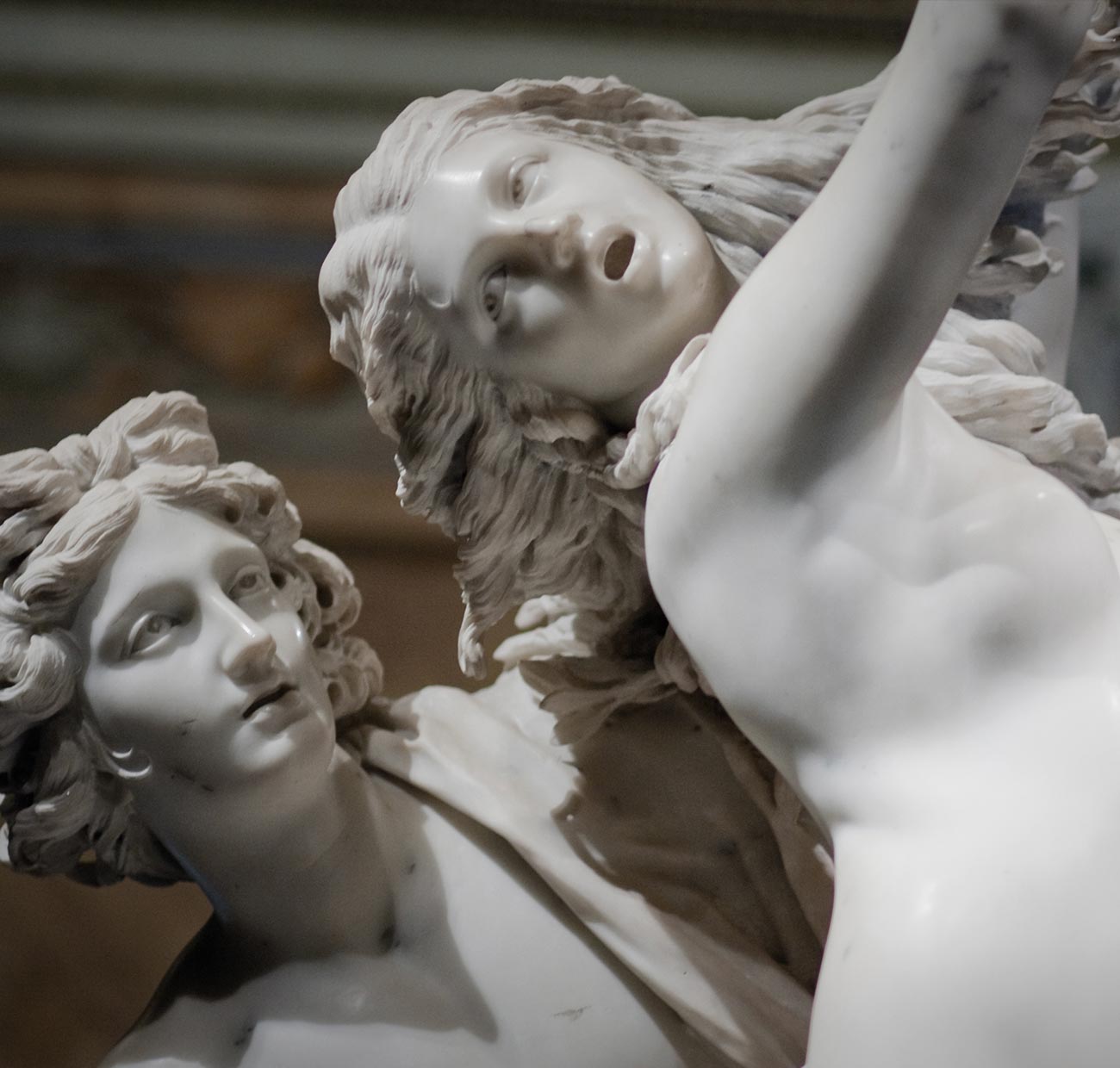 Apollo and Daphne
Gian Lorenzo Bernini. Time appears to stand still in the instant when Daphne, fleeing from the love-stricken Apollo, turns into a laurel tree. This magnificent vision was created in Carrara marble by the renowned Baroque sculptor Bernini for Cardinal Scipione Borghese. As the inscription on the base tells us, "He who in love pursues the joys of fleeting beauty fills his hands with fronds and picks bitter berries". 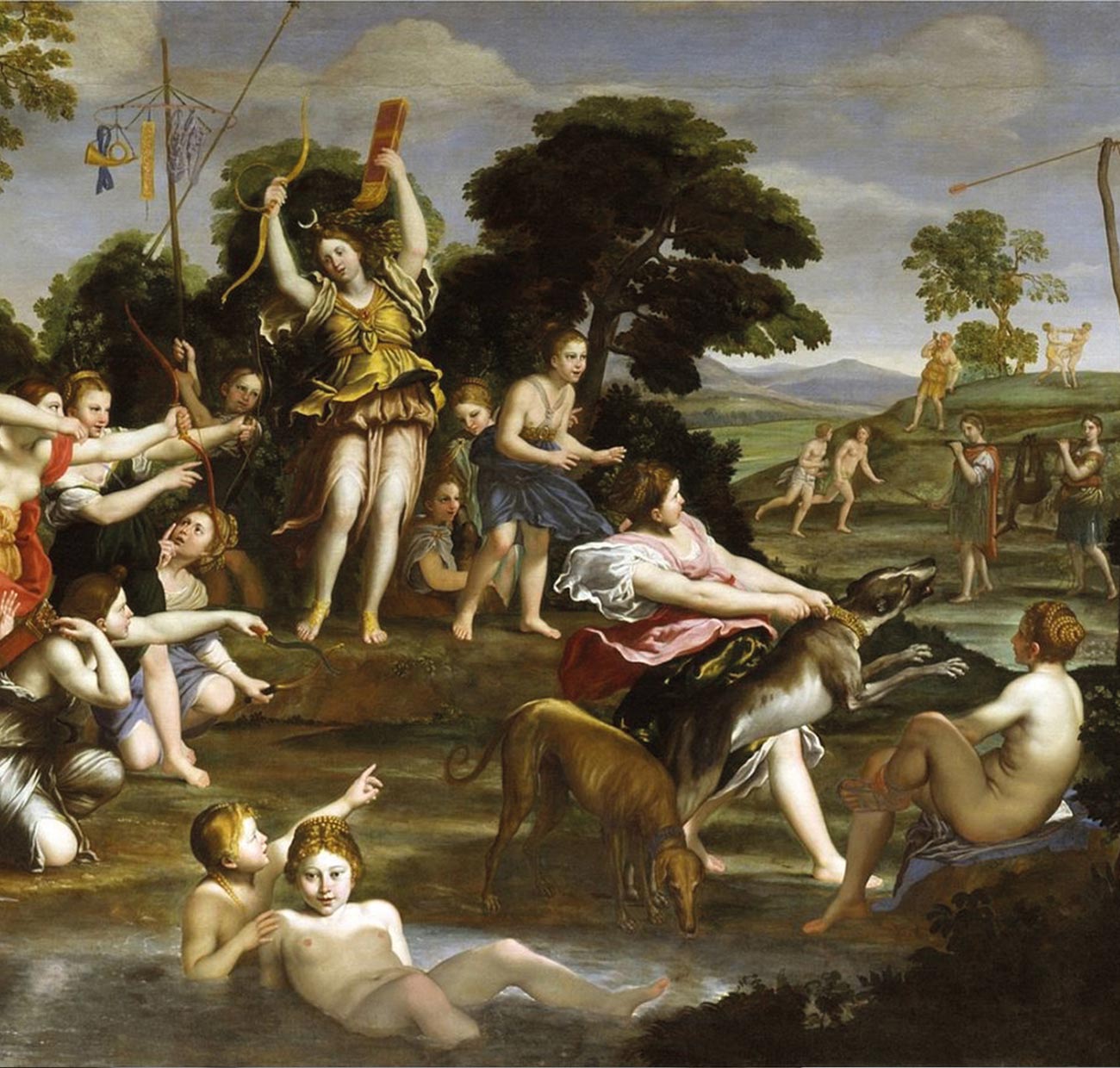 Archery Contest of Diana and her Nymphs
Domenico Zampieri, known as Domenichino This canvas by Domenichino is filled with the figures of nymphs during an archery contest, a subject drawn from Virgil's Aeneid. While the victor is Diana, shown holding her bow and quiver aloft in triumph, she is somewhat upstaged by the delightful nymph bathing in the river. Scipione Borghese liked the painting so much that he had the artist imprisoned in order to persuade him to deliver it to him instead of the client who actually commissioned it. 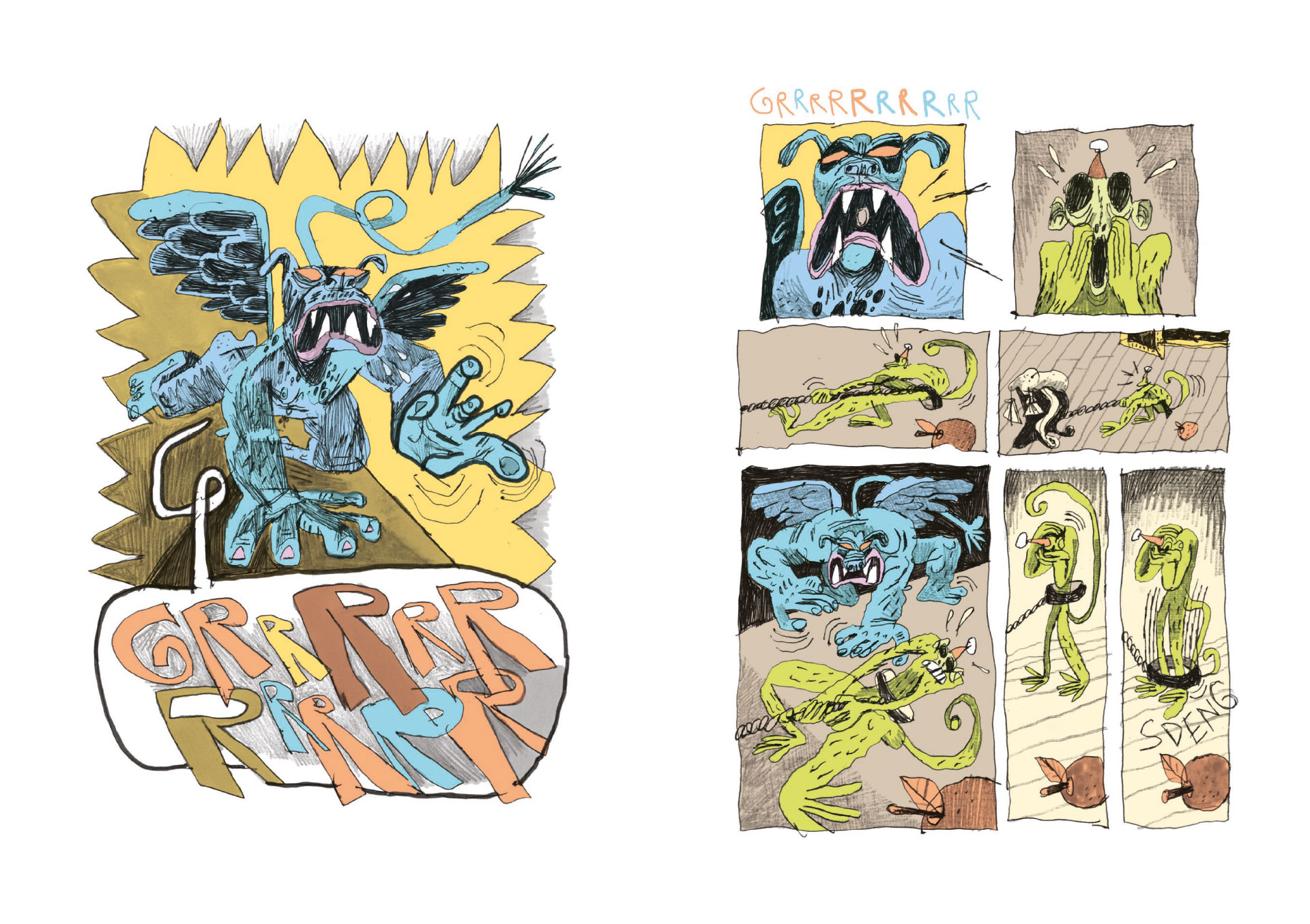 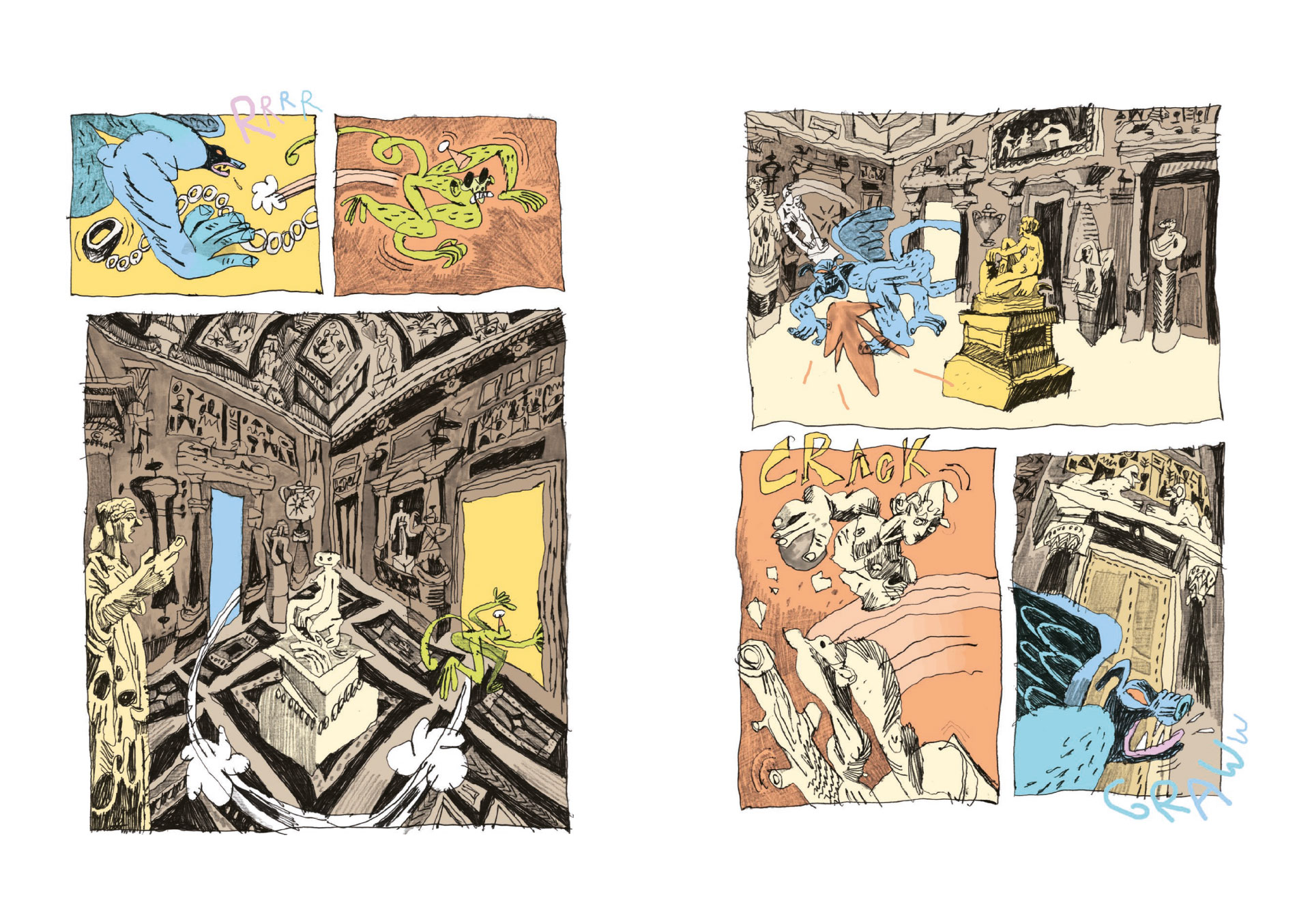 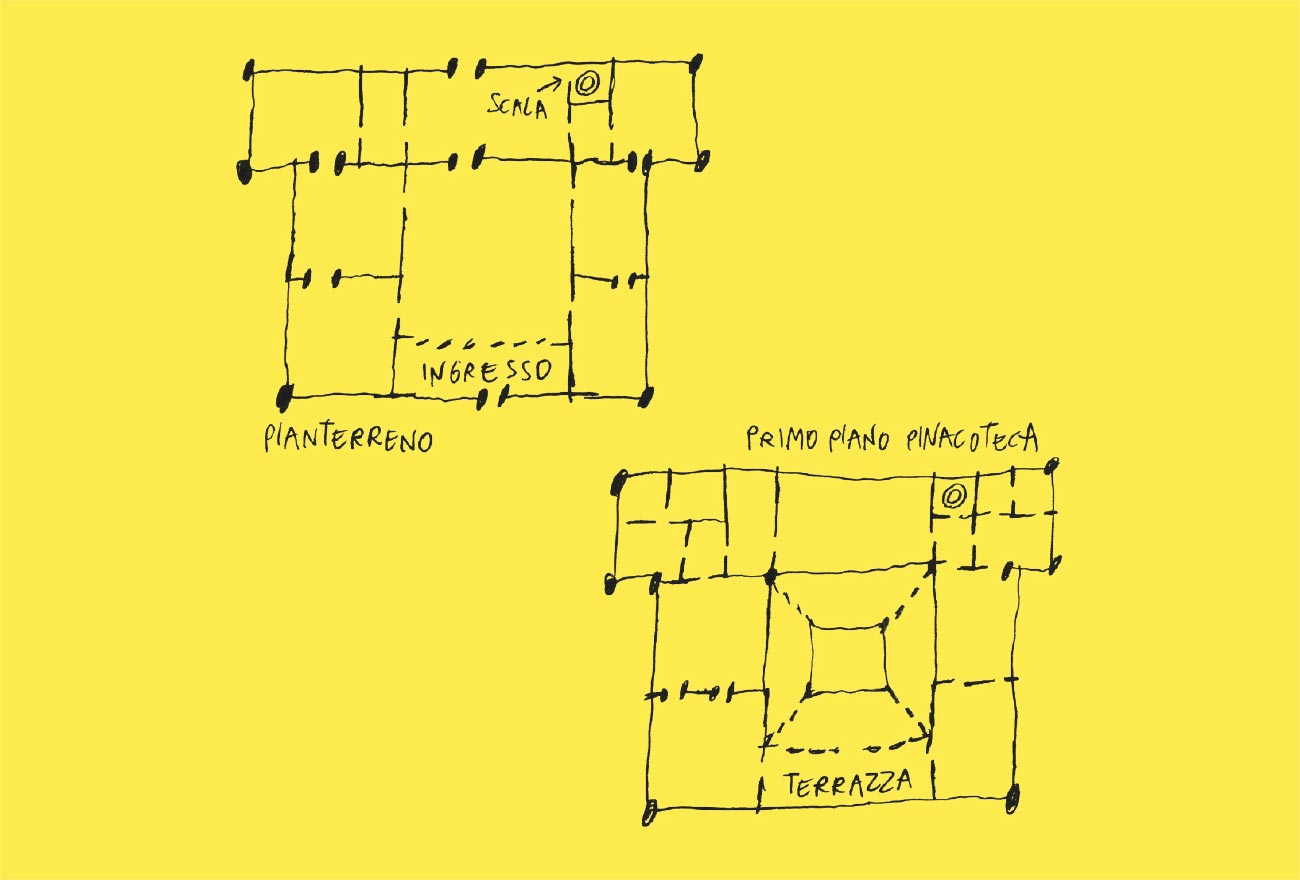 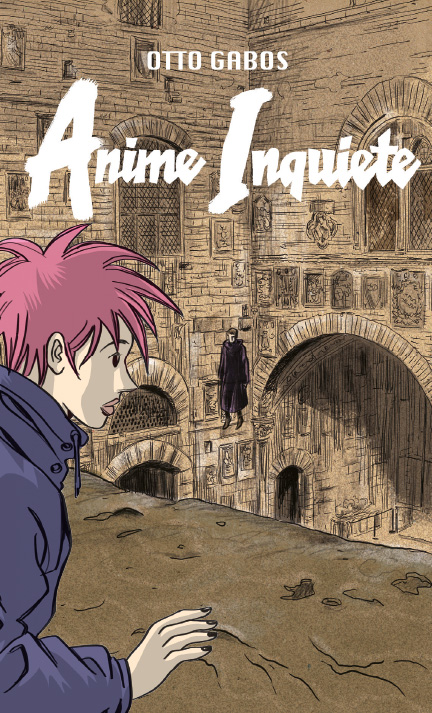 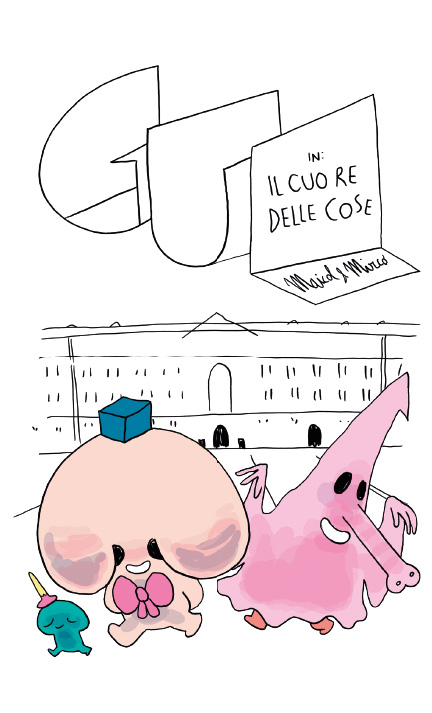